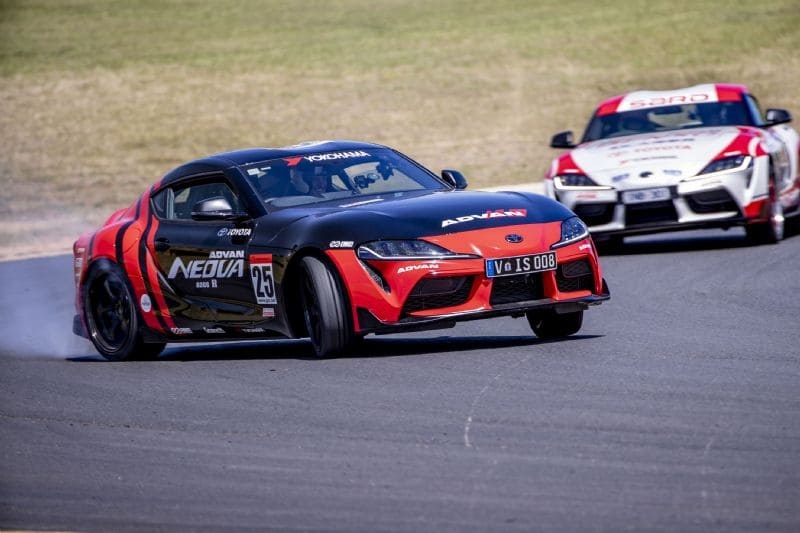 Sydney motorsport fans are in for some tyre-smoking action as Japanese Drift King Keiichi Tsuchiya returns for the 2019 World Time Attack Challenge at Sydney Motorsport Park on 18-19 October.

In the lead up to the action-packed event, Tsuchiya and Aussie drift champion Beau Yates also tested out the racing potential of the all-new GR Supra, with some smoking laps around the Sydney circuit.

After a few laps of the Sydney Motorsport Park, Tsuchiya said the new GR Supra - which was wrapped in the retro livery of his own Japanese Touring Car he campaigned for Toyota in 1998 - was easy to drive and was a really good platform, particularly compared with its A80 predecessor.

"The A80 has a lower base so you can start sliding at a lower speed but the new one has a much higher grip level so you can drift it at higher speeds and it is a better balanced platform," Tsuchiya said.

"Since the grip level is much higher, once you start sliding it, you get more feedback and you can drive it at a much higher speed," he said.

Drift fans will be able to check out the two GR Supras driven by Tsuchiya and Yates, with the cars on show over the weekend at the Toyota display.

WTAC attracts top drivers from around the world who are set to go head-to-head and deliver a petrol-fuelled celebration of racing for spectators over the two-day event.

At 63, Tsuchiya may be one of the oldest competitors at the 2019 WTAC but thanks to a lifetime of racing experience, his drifting pace is still up there with the best.

He is also credited as one of the originators of the sport after demonstrating a unique style of driving in his racing debut in the "Fuji Freshman Race" in Japan in 1977.

That same year, he joined the Toyota Works team and later, was one of the drivers of the Toyota GT-One that won at Le Mans in 1999.

Over the course of his career before retiring from full-time racing in 2003, Tsuchiya raced everything from touring cars to single-seaters and even NASCARs.

Joining Tsuchiya in the Supra was Yates, a Toyota Genuine Parts-sponsored drift racer who won his first Drift Australia Championship in 2006 in an AE86.

These two drift stars, along with all the other competitors in the WTAC are set to put action first this weekend with the WTAC giving fans the opportunity to get up close and personal with some of the best drift cars and drivers in the world.